Skip to primary content
Although the Uist group helped the ACCORD team produce a brilliant set of 3D images of the best preserved wheelhouse on Uist during their stay, after they left we felt rather overwhelmed by the computing power required to deliver 3D imaging of any scale when working offline.  However the potential of this technique for recording some of the thousands of archaeological sites on Uist would not go away and we were keen to work out how at least to test the software with a basic laptop or PC of the kind that most community members have at home.  We also felt that aerial photography was a good way of getting a good general overview of some of the bigger sites – we had been testing a basic kite rig over the summer and using it to mesh 2D photographic views that could also be used to generate plan drawings.
As the kite rig took pictures using video it was suddenly realised that rather than dealing with digital still images of between 2-10mB each, extracted stills from video film are only around 150kB in size and the 50 or so of these required to generate a half decent 3D image would only be a 7.5MB file rather than up to 0.5GB for full size stills.  Using these small images, rather than waiting hours for a result, you will see something in a few minutes. 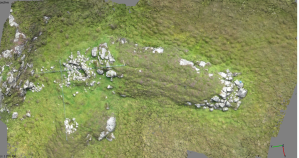 This enigmatic and unrecorded site was only recently discovered by a local resident in a remote peninsula on the island of Grimsay. It comprises a long natural rock outcrop jutting out into a marshy area, which has at one end a curious V shaped plan structure with corbelled rubble walls and a water basin at its node point. The image is made up of around 30 no 150kB digital stills taken off a video recorded by a Canon Ixus 220 camera suspended from a Cody kite. Copyright: David Newman. 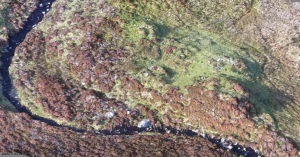 The remote moorland on the east side of Uist has hundreds of shieling mounds scattered across its hills, some alone, some in groups of up to 15, where families used to spend summers grazing their cattle away from the machair townships. Many of these sites are unrecorded and some of the larger mounds show clear signs of earlier settlement lying under 18th/19thC shieling structures. This remote example is one of the largest so far discovered and includes the remains of four separate stone buildings on its summit and west facing slope. A smaller partner mound on the other side of the adjoining burn has been partly eroded revealing some of its sectional structure. The image is made up of around 80 no 150kB digital stills taken off a video recorded by a Canon Ixus 220 camera suspended from a Cody kite. Copyright: David Newman

So the Uist ACCORD group recommends the following procedure as a start up 3D imaging idea:

1. take a video rather than stills of your site remembering to cover all angles (no kite needed!),
2. abstract around 50 still shots,
3. download the freeware version of Agisoft PhotoScan and the very useful pdf instructions, load up your photos and run the software (the ‘workflow’ tab is key!) be amazed at the results of your work.
Clearly the detailed quality of imaging isn’t nearly as good as it would be with high resolution stills, but it will get you used to both the techniques, the software and the abilities of your own computer.  When you are reassured you have mastered the technology, you can be more confident about setting your PC up to run overnight.
Good imaging!
David Newman, October 2014.